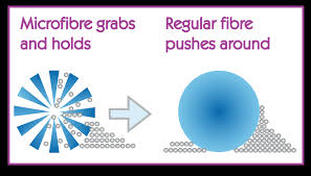 In cleaning products microfibre is a blend of polyester and polyamide (nylon). In higher quality cleaning textiles the fibre is split during the manufacturing process to produce spaces in each fibre. If you were to look at a cross section of split microfibre it would look like an asterisk. It’s the split fibre working in conjunction with the space between them that do the work. They pick up and hold the dust and dirt, and absorb liquid. Lower quality microfibre cleaning products may not be split (neither is microfibre clothing or furniture because you don’t want them to be absorbent).

For microfibre to be effective as a cleaning product it has to be split microfibre. If microfibre isn't split during manufacturing it isn't much more than a very soft cloth, duster or mop. Microfibre that is used in clothing, furniture and other applications isn't split because it isn't designed to be absorbent, just soft. It’s important when buying microfibre cleaning products to make sure that they’re split. When buying from a retail store if the packaging doesn't say its split, don’t assume it is. One way to determine if the microfibre is split is to run the palm of your hand over it. If it grabs the imperfections on your skin then it’s split. Another way is to pour a small amount of water on a table and take a towel or mop and try to push the water. If the water is pushed it’s not split microfibre, if the water is absorbed or sucked into the fabric then it is split microfibre.

In addition to the open spaces in the fibres created during the splitting process, microfibre is an effective cleaning tool because the fibres are positively charged. Dirt and dust are negatively charged so they are literally attracted to microfibre like a magnet. The microfibre holds on to the dust and dirt until it’s released in the laundering process or when it’s rinsed out.

The attributes of split microfibre discussed above make it a true green cleaning product. Microfibre works extremely well as a cleaner without added chemicals. All of the edges on each fibre created during the splitting process act like squeegees scraping up the dust and dirt while the open spaced between the splits hold it. When water is added to the towel or duster it helps emulsify the dirt allowing it to be scrubbed off the surface being cleaned.

The advantages to using microfibre to clean are almost endless. Given the facts that they can last hundreds of washings when cared for properly, can absorb 7 times their weight in liquid, are hypo-allergenic, don’t need added chemical cleaners it’s no wonder their popularity has sky-rocketed in the last decade.
​​

Take a look at some of our microfibre products...